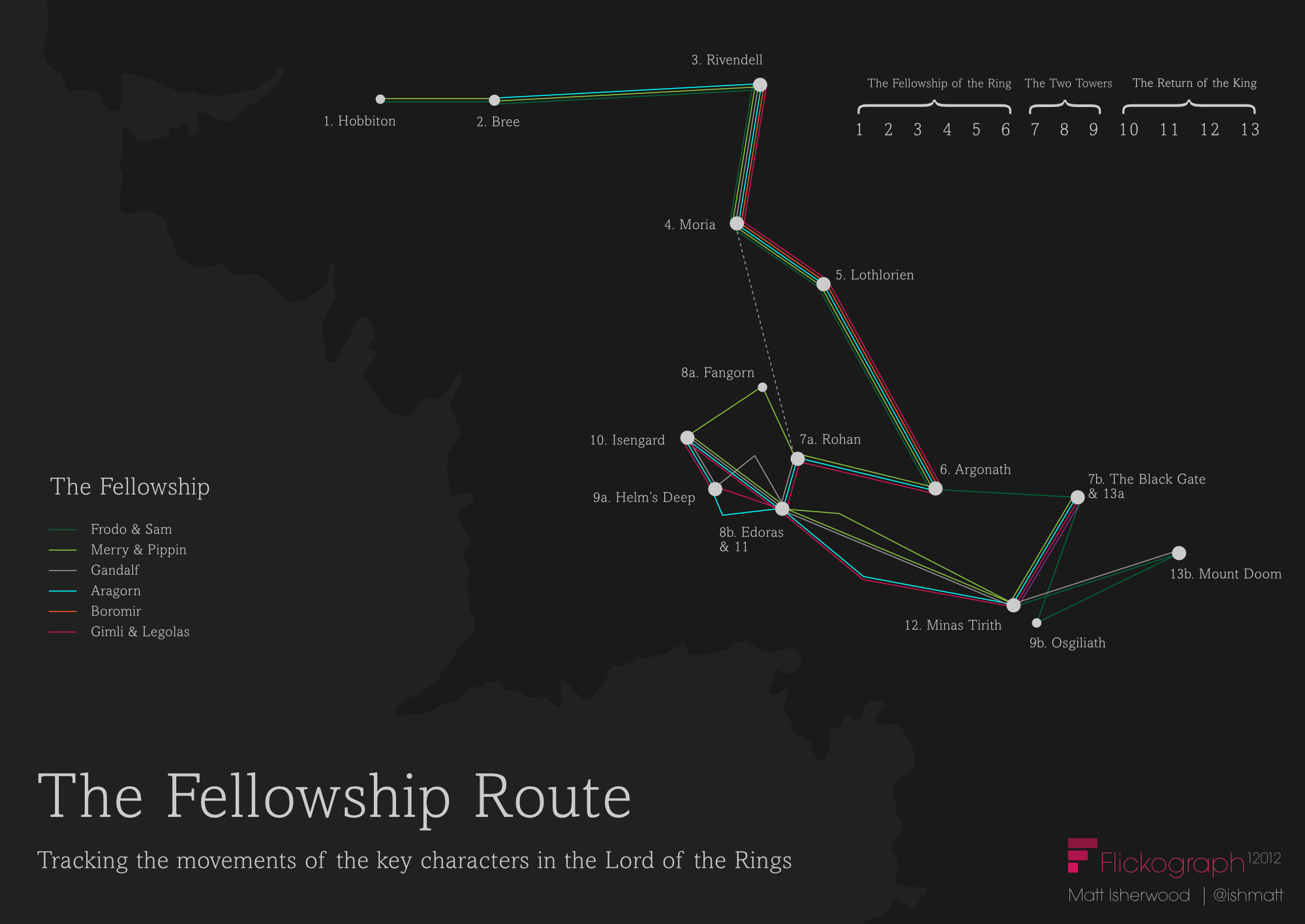 This one came about purely because I wanted a map showing where the characters in the Lord of the Rings films go. There are plenty of maps of middle earth but I couldn’t find anything showing where they travel to. There are numerous other characters but I’ve focussed on the nine of the fellowship and have grouped a few of them together to make it more readable. Hopefully the graphic holds up on its own but if you want it, here are the details around what’s happening at each point:

The Fellowship of the Ring

1. The four hobbits leave Hobbiton and get things underway.
2. Aragorn/Strider joins the fun at Bree.
3. At Rivendell the Fellowship is assembled.
4. They get as far as the mines of Moria before losing Gandalf to the Balrog.
5. The rest of the Fellowship make it to Lothlorien and Galadriel, before hopping on boats down the river.
6. They make it to roundabout Argonath where they are attacked by Orcs, Boromir’s journey ends and the Fellowship split.

7a. Merry and Pippin are taken to the plains of Rohan by the Uruk Hai who are attacked by Eomer’s riders enabling the hobbits to escape into the trees. Aragorn, Gimli and Legolas give pursuit but miss out on them only to bump into Gandalf (now the White)…
7b. … at the same time Sam and Frodo pick up Gollum in making it to the Black Gate of Mordor, where Faramir and his men capture them.
8a. Merry and Pippin get to know the Ents in Fangorn forest…
8b. …while Gandalf, Aragorn, Gimli and Legolas find their way to Edoras and King Theoden.
9a. Gimli and Legolas goes with the main party to escape to Helm’s Deep. Aragorn gets their a bit later via being washed down a river but in time for the big battle. Gandalf had set off to find Eomer’s men before arriving at the battle in time to swing things…
9b. …whilst all this is going on Frodo and Sam are taken to Osgiliath by Faramir before being freed.

The Return of the King

10. Gandalf, Aragorn, Gimli and Legolas meet up with Merry and Pippin (carried by the Ents) at Saruman’s tower in Isengard.
11. They all then regroup back at Edoras before Gandalf first sets off with Pippin to Minas Tirith (hence these hobbits’ split line)
12. Aragorn, Gimli and Legolas raise an army under the mountains via the Paths of the Dead before reaching Minas Tirith whilst Merry sneakily joins Theoden’s Army for the big finale battle.
13a. After winning the scrap at Minas Tirith Aragorn leads an army with Gimli, Legolas a, Merry and Pippin to the Black Gate to distract Sauron…
13b. …while Frodo and Sam have overcome Shelob to reach Mount Doom and toss in the ring before Gandalf arrives with some giant birds to bring them home.