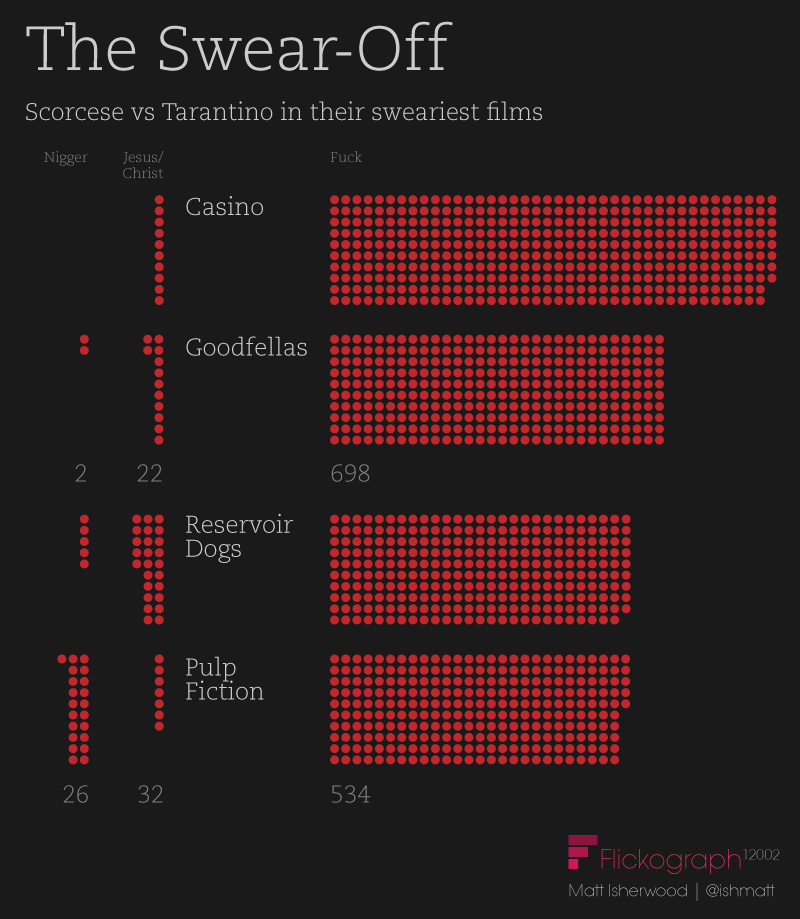 The genesis for this graphic was some A-level English coursework I did back in the day. In this I studied how swearing was used in different ways in Pulp Fiction. So when I started making flickographs I thought, just how sweary *is* Pulp Fiction? I found this rather good list on Wikipedia of the films that use the word ‘fuck’ the most. And it turns out Pulp Fiction only comes in at 23.

What struck me more was just how roundly beaten Tarantino has been on the fuck front by Scorcese with films at number four and 10 in the list. So I thought I’d look a bit deeper into the comparison between these two heavyweight sweary directors and here are their records compared across how sweary they are, how much they blaspheme and how racially abusive they are. So whilst Tarantino loses out on the f-word, he does take the prizes in the lord’s name and n-word categories. Incidentally there’s only one c-bomb in all four of these films and Casino has it.

Data for each film from familymediaguide.com

My first flickograph had to be for Star Wars. Being the films that have probably generated more fan-related online content than any other. Also I used to be fairly obsessed with the films as a teen (well done the special editions) before getting over them/getting disillusioned (well done the prequels).

I started creating this graphic with the hypothesis that as the films went on (in real-world chronology rather than in-film) the amount of lightsaber action increased climaxing at a peak of ridiculousness in the third part. In fact the reality is a bit more messy but I liked that this chart is a record of all the lightsaber duels in the films and it does show just how ridiculous that third episode got. Importantly you also get to see which colour weapon they each had. If anything, I suppose the battles don’t take up as much screen time as you might think.

I’ve also included the comparison of the two greatest light-wielders in the series: Obi Wan and Anakin/Darth Vader. Perhaps unsurprisingly Anakin/Vader has the longer time fighting across the series, being as he fights in five films to Obi Wan’s four.

The duration was calculated by timing from when the first person in the duel lit their lightsaber to when the last person lowered their weapon. Gaps where they weren’t actually fighting were counted if they were facing off against each other/looking at each other but weren’t counted if one had run away/was in another room.