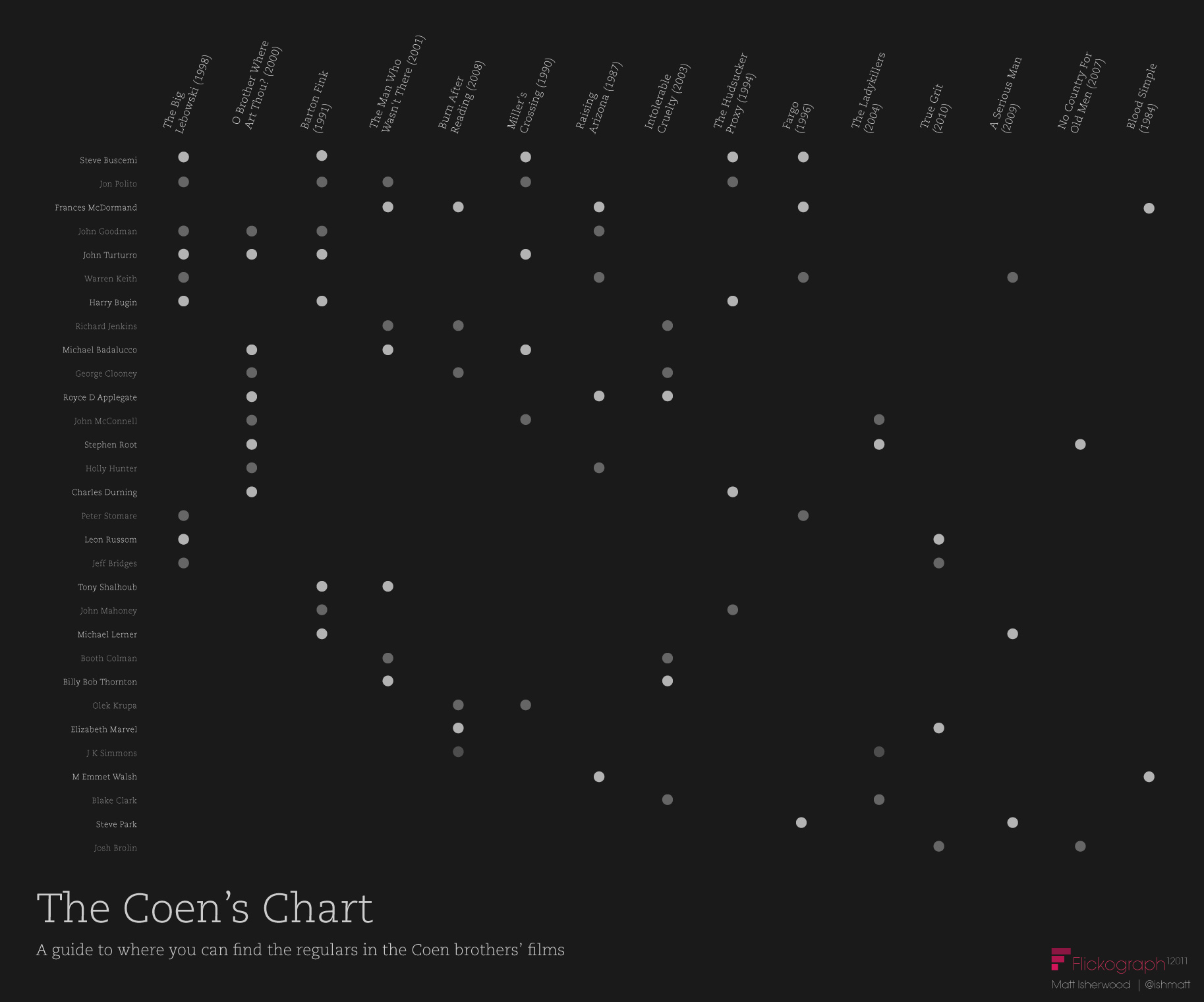 Hey, those quirky Coen brothers like to use the same actors in all their films don’t they! Don’t they? Sort of.

Here are all the actors who have appeared in more than one film by the brothers with those nearest the top being the ones who appear in the most. Going left to right we have the films with the most frequent collaborators to the least. The honours of most frequent actor appearances are shared between Frances McDormand, Steve Buscemi and Jon Polito with five. The film with the most regulars in is possibly their most famous picture The Big Lebowski with nine, followed by O Brother Where Art Thou and Barton Fink with eight.

Plotting this I started with the obvious stars but when I included all the actors (which meant all the smaller names) it soon became clear that over half of them only appear in two films so hard to call them that ‘frequent’. So there are thirteen actors who appear three or more times over fifteen Coen films. A bit of a troupe but overall their acting picks may not quite be as predictable as is made out.

In case the graphic needs further explaining, each dot is a film that they have appeared in (or in Tim’s case, directed) showing the Depp/Burton axis goes back to 1990. They had a break after Sleepy Hollow, while the director went off and discovered HBC before realising he could put them both in films and has done just that from 2005 onwards. It also shows the two actors have had a good number of other projects outside the ‘triangle’ with Bonham Carter working non-stop between 1995-2000 and Depp keeping busiest in his Burton gap of 200-2005.

Jack Nicholson famously redefined how much the bad guy can get paid in a Hollywood film but which of the Batman villains have the most to say? Well they were all quite roundly beaten by Danny DeVito’s Penguin with nearly 150 lines in Batman Returns. And Ledger’s Joker had a very similar number of lines to Nicholson. And as pairs go, Freeze and Ivy had more to say than Two Face and the Riddler (unfortunately).

I’ve not included Catwoman because she’s more neutral than bad and have skipped the bit-part bad guys like The Scarecrow but otherwise I’ve tallied up every time a villain spoke in the scripts of all the films. 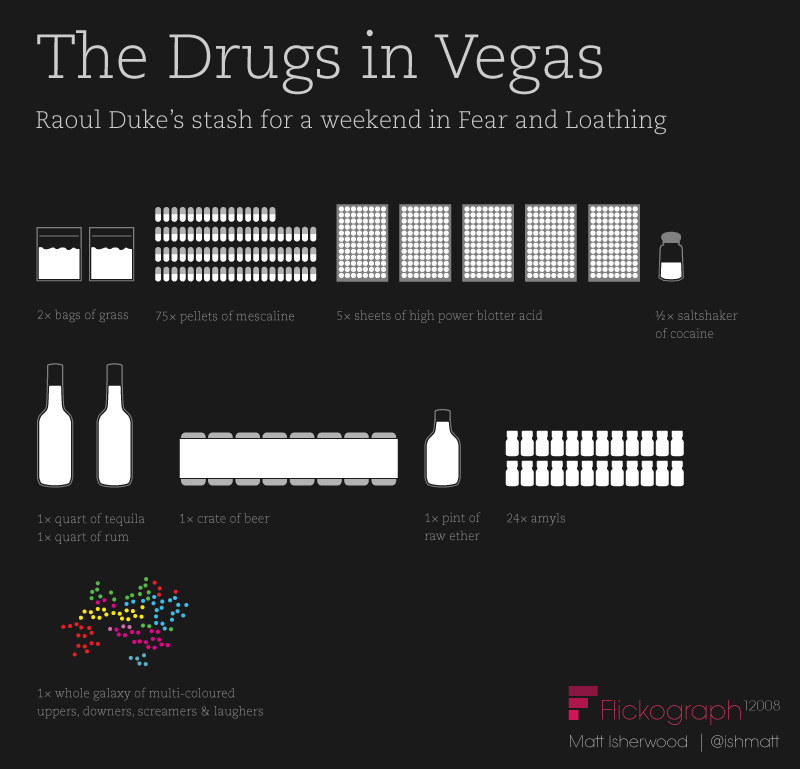 “We had two bags of grass, seventy-five pellets of mescaline, five sheets of high-powered blotter acid, a saltshaker half-full of cocaine, and a whole galaxy of multi-colored uppers, downers, screamers, laughers… Also, a quart of tequila, a quart of rum, a case of beer, a pint of raw ether, and two dozen amyls. Not that we needed all that for the trip, but once you get locked into a serious drug collection, the tendency is to push it as far as you can. The only thing that really worried me was the ether. There is nothing in the world more helpless and irresponsible and depraved than a man in the depths of an ether binge, and I knew we’d get into that rotten stuff pretty soon.”

The origin of this graphic came from my old university house, where for a while we got into playing our own version of the game six degrees of Kevin Bacon, where we had to connect one actor to another via the films they’ve appeared in together. We soon learned that Samuel L Jackson was a very useful card to play, as most actor connections in modern Hollywood seem to go through him. This graphic pretty much proves that, showing he’s appeared in films with no less than 150 big Hollywood names. The people he’s appeared in more than one film with owe a debt to the Star Wars prequels and Marvel series of superhero films he’s been a part of.

If you want to interrogate the infographic further to find out just who he has performed with, I’ve tried to keep the names in roughly in alphabetical order going clockwise around the circles. 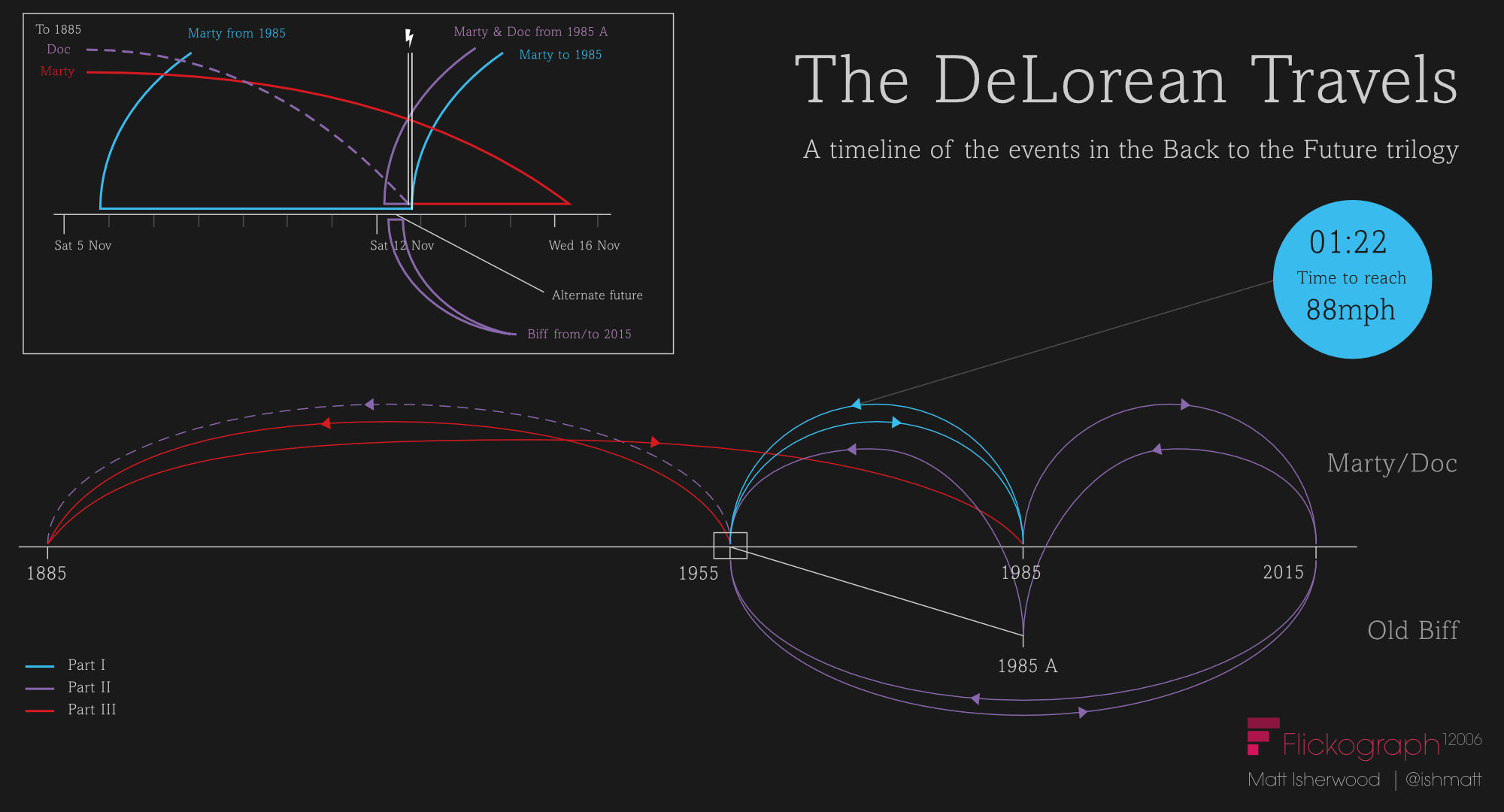 It’s Back to the Future! Arguably one of the greatest films of all time(s), certainly one of the greatest scripts: funny, tightly plotted, memorable characters, intelligent, great for all the family and has an excellent guitar solo. What more do you need? How about the answer to just how many trips does the DeLorean make through time in the series? The answer is ten but for a more detailed explanation of those trips see the graphic above.

Most of the time-travelling is done in Part 2, which also features Biff getting hold of the car and popping back to 1955, as shown by the lines under the timeline. I’ve also zoomed in on the frantic 10 days in 1955 where most of the action centres around. This diagram also shows the two key lightening strikes (the first that sends Doc all the way to 1885 in Part 2 and the key plot device from Part 1 that gets Marty back to 1985). As a bonus, I checked and it took Marty one minute 22 seconds to from 0-88mph for his first time travel.

I’ve deliberately simplified the timeline as much as possible to exist on one plane (apart from the alternate reality as highlighted by the Doc in Part 2) but if you’re going to be really precise about how the timelines would work, read up on this very comprehensive post on the Back to the Future wiki (there’s actually eight of them…). 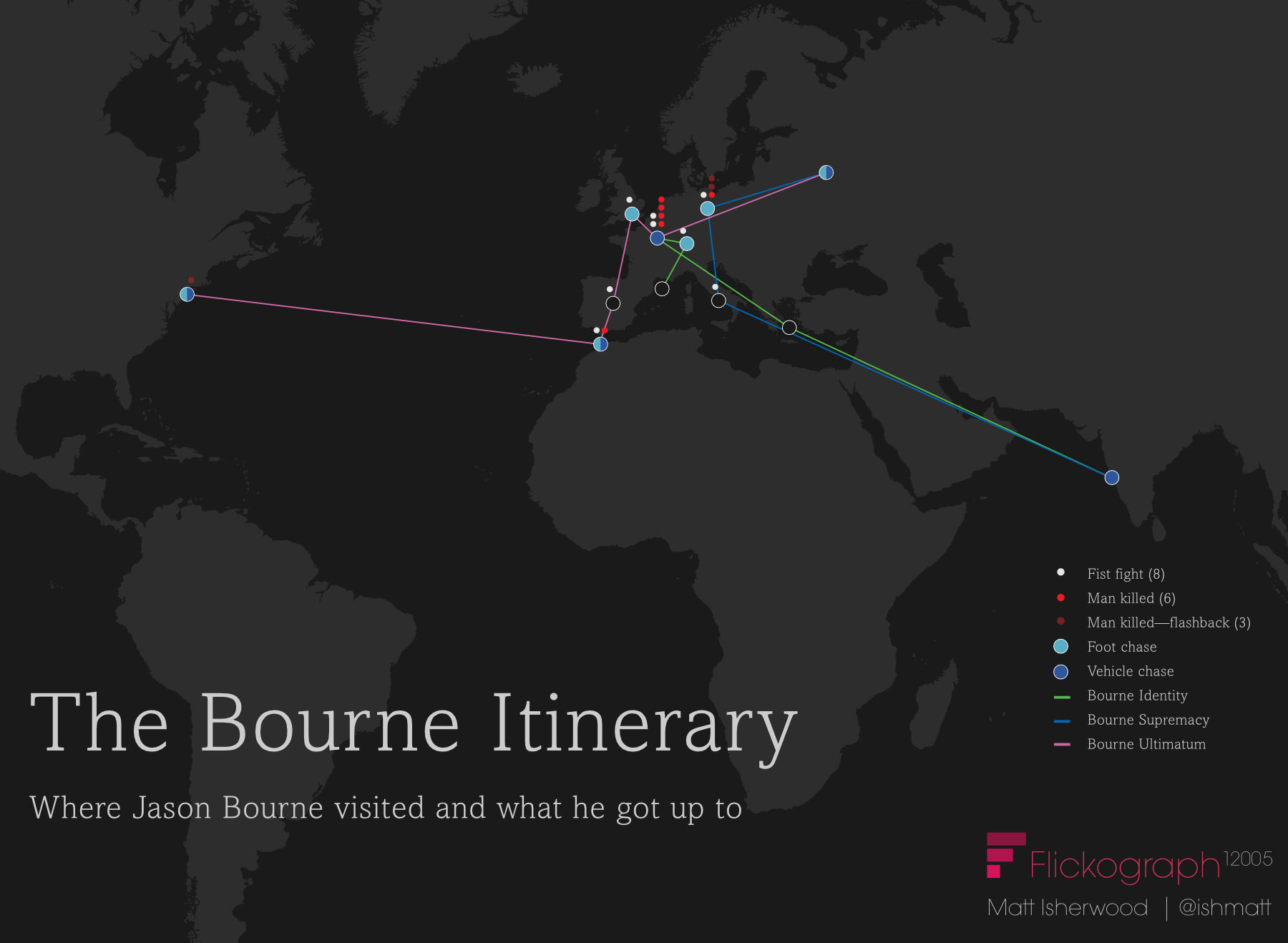 There aren’t many better film trilogies than the Bourne films (the one’s with actual Jason Bourne in, not including the Jeremy Renner version). He’s known for his European travel so I thought it would be worth finding out in which city he did the most damage. Turns out it’s definitely Paris, where the majority of The Bourne Identity takes place (while the other films tend to flit around more). But he certainly got around a decent chunk of Europe bookended in the West by New York and the East by Goa. The complete order of locations is: Marseille (off the coast of), Zurich, Paris, Mykonos, Goa, Naples, Berlin, Moscow, Paris, London, Madrid, Tangier, New York.

If you look closely you might realise that the kill counters in each city have some subtle variations in New York and Berlin as the faded versions represent people you see Bourne kill in flashbacks. 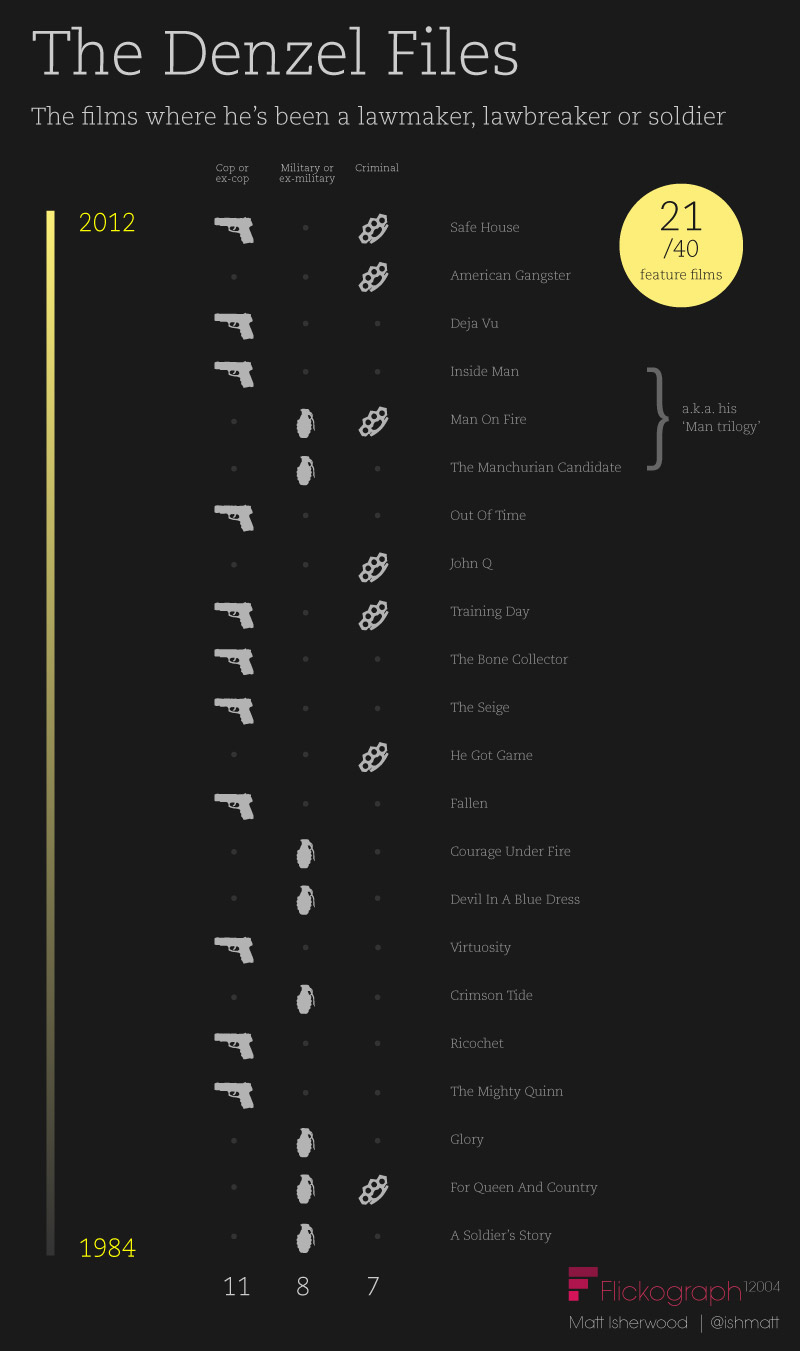 I could probably watch Denzel all day. The man has serious screen presence. Often playing characters with strong beliefs, this graphic started with a theory that Denzel always seems to play characters on one side or other of the law, especially recently. A study of his career CV shows this isn’t quite true with about half of his films to date featuring him as a policeman, criminal or military man. However with 11 cop roles it has got to be the most popular of his character’s professions.

If there is a pattern it’s that the police connection is strong throughout his career with him tending to do a lot more military-related roles early on before getting more into the law-breaking side of things in recent times.

Certainly not the biggest or strongest dataset to work with but 11 police roles feels like quite a few. It leads me to wonder if many actors have done more in feature films? I sense another graphic…